A Star is Born is an adaptation of the 1937, 1954, and 1976 versions of the A Star is Born movie. It is directed, co-written and co-starred by Bradley Cooper, but the lead is Lady Gaga as Ally, a young musician helped by Jackson Mein (Bradley Cooper) to find fame, recognition, and her own special voice. This movie is an excellently directed, very well written, exceptionally performed, and well produced romantic drama with a lot of singing in it; beyond the ending feeling abrupt and unsatisfactory (more on that later), I have no real issues with it and had it been any other year, where less movies of my liking were released, it would have been the biggest surprise for me. Lady Gaga is already getting buzz for an Oscar nomination and I couldn’t agree more with that sentiment; Bradley Cooper does an excellent job directing this movie, which is more impressive considering this is his directorial debut. If you have any interest in watching a romantic drama with excellent writing and characters, then stop reading this and go watch the movie; if you’ve already seen it or don’t care about spoilers, my main issue and the point of discussion for this article is about the ending of the movie, and why it did not work for me as well as I wanted.

Last warning for spoilers: After this line ends, the whole movie will be spoiled!!! 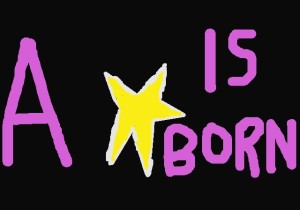 Let me start by clarifying what part of the ending I felt was abrupt and unsatisfactory; it’s not the hard cut to black ending shot, it’s the ending for Jackson Mein’s character. Before that though, I’ll thoroughly establish my reading of the movie so we can be on the same page about why the ending felt that way for me. This movie is focused solely and exclusively on Ally’s character arc; although the movie starts from Jack’s perspective and follows him for the first few minutes and later on focuses on his perspective, he’s not the lead and the movie is not about him. Ally’s arc is defined, set up, and executed with extreme skill and attention; we go through her journey and we care deeply about her. From her humble beginnings in a drag bar making ends meet; to her breakthrough—both in music and emotionally—with Jack and finding her special qualities; her spiral into a world of superficiality and successes that suppress and replace her special qualities with bright hair colors, extravagant dance choreographies, and shallow lyrics; the devastating “wake up call” and her rebirth as the Ally we wanted her to be. This is excellent writing and the world/characters around her reflect this arc perfectly: For example, Ally’s biggest struggle to breaking through was that she thought she had nothing special and was doomed to obscurity because of it (an idea she is constantly told by her father who is trying to protect his daughter from the pain of failure, but urges her to at least attempt when the opportunity arrives). She finds her special qualities through her romance and musical co-existence with Jack, who—in contrast—cannot deal with his own complicated family relationship and the aftermath of that (his father being an alcoholic who taught him to drink from an early age, his brother having been a singer who did not succeed, etc.) and his own special qualities are slowly fading—just like his hearing—under the weight of fame and alcohol. Furthermore, the opposite is true in terms of keeping their own selves during the chaotic rise of stardom they both faced; while Jack kept his unique voice and messages, Ally allowed her manager to change her hair color and her identity as an artist, in order to become a bigger star and gain more recognition.

This is important to state because, in a holistic sense, the movie pulls off an excellent ending; as a wakeup call to Ally, Jack’s suicide is as strong as she is going to have and having her transformation complete in a memorial concert for Jack with a cut to black moment is a pretty strong ending, both emotionally and thematically. But, through Jack’s character being a contrast to Ally’s strength and weaknesses (as well as a warning to her), Jack also becomes a character in his own right; maybe through the incredibly charismatic and well-acted performance of Bradley Cooper, maybe because the writers intended it to be so. So, looking at his suicide through Jack’s character is what makes his end seem unjustified and abrupt: In the movie’s flow, Jack is at his lowest when he literally pisses himself on stage during Ally’s Grammy award win, and is forced into rehab to regain control of himself and confront his demons. We go through this process with him, learning more details and secrets about him—like his first, failed attempt at a suicide, and a shot of him swimming at the bottom of a pool and emerging to the top—ending with him successfully completing the process and returning home. After a period of time passes and Jack happily enjoys life and starts writing and singing again, a mean-spirited conversation with Ally’s producer convinces him that suicide is the only option to stop holding back Ally’s career and stop embarrassing her publicly; the position of this interaction just feels wrong and makes Jack feel like a vessel for Ally’s arc and not an actual character.

Just to reiterate: From a narrative standpoint, the ending and its buildup works. The recounting of the first suicide attempt and the producer saying “back from the dead” when he sees Jack are pretty good foreshadows of what’s to come; Ally’s brief appearances during Jack’s rehab, are supposed to be showing her ‘lack of progress’ despite her success; Jack’s suicide and his perceived reasons for it (his shame and guilt for holding her back and embarrassing her) are the reasons she needs to go through her transformation and reclaim what makes her special. The ending works excellently in emotional and narrative levels, but from Jack’s perspective it felt off for me, and despite Jack not being the protagonist or the focus of the movie, it felt like a significant portion of the movie was “sacrificed” and felt abrupt.

A couple of caveats though: First, suicide is pretty hard to achieve as a narrative device for me. The only instance I can recall of suicide feeling like the appropriate decision was in “Battle Royale” and the discovery of Shuya’s father, who committed suicide; this works for me because it serves a dual purpose—giving Shuya reason and will to not die and give up like his dad, as well as showcasing the horrors the grown-ups went through and how they deal with them, making the cruelty to follow more ‘understanding’—as well as being a striking and appropriate introduction to the movie’s themes and violent imagery. Second, the abrupt ending of Jack’s story can be attributed as a “realistic” depiction of suicide, as people around the person who committed suicide will get an abrupt, non-discussed, unsatisfied ending to that story, without reason or purpose; that’s valid, but from my viewpoint, movies should always attempt to do what’s best for their stories and their brand of entertainment, and in this case, it was not the best.

Regardless of this, A Star is Born is one of the best “soap operas” or “wish-fulfillment” media of the year, because it understands that presenting a fantasy and then simply granting it, is not enough; we go through a dream scenario with Ally, encounter and overcome plausible fears from that scenario, and walk out with her—and us—in the place we wanted her to be in, when we started her journey, but without everything she wanted in order to make it feel more “real”. It made one of the best casting choices of the year in Lady Gaga, who delivers an outstanding performance and whose own personal story adds an extra layer of meta-narrative. Overall, a great movie, but with an ending that does not work on all the levels I wanted it to; maybe if they used his loss of hearing as more of a factor—which would make thematic sense as well—or made Jack more melodramatic, but I’m not going to attempt to suggest to excellent filmmakers suggestions on their excellent piece of entertainment. Nor will I ignore the fact that the movie sets up Jack to be impulsive and deeply sad, which would make his action make narrative/character sense to some people, but to me, they do not and I wanted to explore why. Thanks for reading.